Up close and personal

Gosh - where do I start? At the very beginning I suppose, but first, a quick low-down on now. 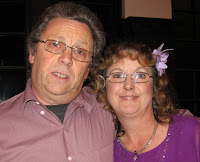 I'm married to Dianne and have two adult sons, four grandsons and one granddaughter. I also have three adult stepchildren and four stepgrandchildren. We live in Sunbury, Victoria, Australia. I've lived here in Sunbury since 1978 and Di has lived here for the past 19 years after moving from Adelaide.

Back to the beginning

I was born in March, 1951 in the Melbourne suburb of Preston. My parents Sylvia and Raymond were living with my maternal grandparents at the time. Several years later they bought their own home in Reservoir. I remember that we had no phone, no fridge, a wood stove and an outdoor toilet. Television didn't come to Australia until 1956, the same year as the Melbourne Olympic Games. I remember sitting with a huge crowd in the workshop at the local Ampol service station watching the athletics on a small, probably 21", black and white television. Very few people in Reservoir could afford to buy a television in 1956.
That's me on the left with glasses in the photo, aged about 5, with Mum, Dad and my younger brother Bruce.

On Melbourne Cup Day 1958 Mum Dad, Bruce, 8 month old Trevor and I moved from Melbourne to Canberra. That was the beginning of just over 7 years of moving from house to house, state to state and school to school. For me it meant a total of 10 different schools in 7 years. It's probably worth listing those schools.

Newlands Primary School, Coburg, Victoria: Grades 1 & 2. I missed my 'prep' year because in the days of baby boomers there was no room for me.

Lyneham Primary School: Grade 3. The first year of a brand new school in the growing suburbs of Canberra. I still remember my teacher that year, Miss Breeze, who sang on ABC radio one time.

Bowen Road Primary School,  Moonah, a suburb of Hobart. The rest of grade 4 and all but the last month of Grade 5.

Mitcham Demonstration School, Adelaide. The last few weeks of Grade 5 (I think) and about half of Grade 6.

Seaton Park Primary School, Adelaide. The rest of Grade 6 and all of Grade 7. I'll never forget my Grade 6 teacher Mr Sinclair, who was the first to foster my enjoyment of writing. And my Grade 7 teacher Mr Munro, who somehow made the subject of English Grammar reasonably interesting.

Findon High School, Adelaide. My first year and a third of High School, year 8 and the first term of year 9. My English and Latin teachers had a great influence on me. My year 8 English teacher was Tony Shinkfield, who later became Principal of Adelaide's prestigious St. Peter's College. My Latin teacher, Mr Zaborowski, instilled fear into us all, most of us excelling in the language to avoid a terrifying tongue-lashing.

Moreland High School, Melbourne. I was forced to go back to year 8 due to poor reports from my previous school, and rejected by the 'more academic' Coburg High School for the same reason. By the end of the year I was finally beginning to come to grips with mathematics, which set the stage for my eventual direction in later years and University.

Niddrie High School, Melbourne. Years 9 -12. WOW! Four years in one school. Once again I was fortunate enough to have exceptionally good English teachers, especially Bev White in year 10, who, despite my general direction being in mathematics and science, instilled in me a love of creative writing.

An interesting observation. Having experienced 7 years of continually moving house and the purchase of a home in Tullamarine, 47 years later my parents are still in that house. My two youngest brothers, born in 1965 and 1968, grew up in only one house and attended only one primary school and one high school.

Having completed high school I embarked on a Science Education degree at the University of Melbourne with a view to becoming a secondary school teacher. Despite spending much of my first three years playing cards and snooker, participating in protests about conscription and the war in Vietnam and singing/playing in a rock band (more about that later), I managed to complete the degree in the minimum four years with a major in Physics.

During my early years at Uni I was very fortunate to meet some wonderful and exceptionally capable and talented people who have become lifelong friends. We all entered the teaching profession around the same time and had plenty to talk about. Quite a few of those friends were my role models - and still are.

I was also very fortunate to have some fantastic lecturers, tutors and demonstrators in my first year - especially in Physics. Because of the education component in the Science Education degree, first year lectures were conducted by the staff at the Secondary Teachers' College, who unlike their University colleagues, were trained and experienced teachers - and gosh - it was so obvious. From second year we joined the 'pure' Science students at the University, with lecturers who were clearly there for their research skills rather than their teaching skills. Thankfully, there were a few exceptions.

It was the early 70s and the core physics subjects were Quantum Mechanics and Nuclear Physics. Fortunately I was able to do some more interesting stuff including Atomic & Molecular Physics, Thermal Physics, Oceanography & Upper Atmosphere Physics. It was the early days of holograms and I recall spending hours and hours setting up for a hologram (still) of a model sailing ship that could only be viewed with a laser beam. How things have changed. I also recall working for a few hours in the Nuclear Physics lab before I saw the 'Beware of Radiation' sign and realised that I'd been too close to the radiation. I wondered if I had inadvertently become sterile. It was a strange time.

The greatest memoriesof those four years?

Thinking about the very best live concerts/performances I've seen, either in person or on TV, video or DVD.

To put it in context
To put this list in context, it's probably useful to list as many other bands and acts that I've seen live (in person) that I can remember. I'm sure I will have missed quite a few.

Welcome to my website, where you can find out about my books and some insights into Australian wine & winemakers, Australia's dangerous creatures, music & musicians and the occasional obscure scientific fact. Please add your email address above to follow by email.